is the mastermind of Masterplan. He is a german professional guitarist and music producer. Roland is best known for his time in the power metal band Helloween with which he played for 12 years after replacing founding member Kai Hansen. He subsequently created the power metal band Masterplan in 2001, which is still active today.
He was also a great help with his vast knowledge of mixing and helped me a lot with his tips.

„My father gave me an accoustic guitar, which he bought from the former GDR, when I was 11 years old.“

is a German metal vocalist, guitarist, songwriter, and producer who performed in various acts, either as guitarist, solo or choir singer. He is best known for his role as vocalist and one of the founders of the band At Vance, his own band Hartmann and his guest appearances on albums of several prominent metal bands, including Freedom Call, Edguy, Rhapsody, Genius rock opera, Iron Mask, Aina’s metal opera Days of Rising Doom and the metal opera Avantasia where he participated as a vocalist in 4 albums and also as a guitarist of the live and studio line up. He is also guitarist and vocalist with the Pink-Floyd tribute band Echoes.

is an English killer vocalist, best known as the vocalist of hard rock band Pink Cream 69 and former vocalist of progressive metal band Adagio. He released a solo album on 31 August 2007, and is part of German guitarist Alex Beyrodt’s band Voodoo Circle, from 2008 to 2016, returning in 2020.
His new awesome record called “Medusa” will be released in 2021!

is one of the best and most successful singers in the Rock/Metal scene. He’s been touring with bands like Brainstorm, Firewind and Gamma Ray all over the world. His band Metalium was one of the biggest names in the European Metal scene for over ten years. With his new band Sons Of Seasons he already released two highly successful albums and toured with them alongside bands like Epica, MaYaN, Doro, Rage and Kamelot throughout Europe.

is an exceptional singer, born in Aschaffenburg. He studied at the Future Musical School located there, and completed his singing and role studies in 2011. In the Rhine-Main area, Zierof made a name for himself primarily as a singer: he is on stage as the lead singer of various hard rock bands. He is the exceptional singer, who is well known as “Udo” in the successful musical “Hinterm Horizont”, is now the frontman of SIGN-X.

was raised on the California Coast in the company of bearded bikers, pitbulls, and sweet as honey women. When pipes weren’t roaring and dogs weren’t barking, you could hear music was ever present. Stevie Ray Vaughan, Bob Seger, Lynyrd Skynyrd, ZZ Top, Iron Maiden, Van Halen and other rock and roll was cranking to the sounds of waves, chatter, dogs, Harleys and laughter day and night. Christian grew up on that music. He didn’t watch TV or play games much, he socialized and partied to rock and roll.

is a danish born singer and producer based in London now since 2005.
After 3 years of studying at LCM in West London Rasmus now specialises in vocals and performance, but also works in music production and composition.
In 2014 Rasmus was approached by the legendary NWOBHM metal band Diamond Head to audition and join the band since than.

is an incredible Taijiquan Master. He is my knowledge base regarding all the Laozi and DAO stuff in “Spirit of Lao Dan”! Without his huge amount of knowledge I couldn’t have realize it on that level lyricwise. And he was also so kind and spoke the chinese intro for the album as kind of a template for me. And so I was able to imitate it. That’s why you here my voice in chinese in the intro of the record. 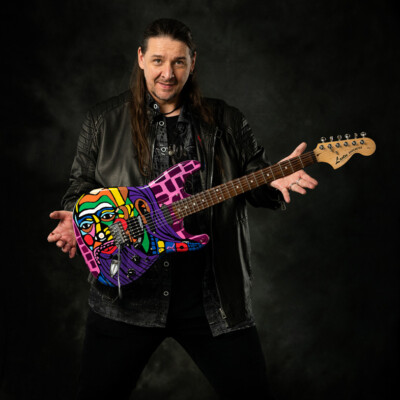